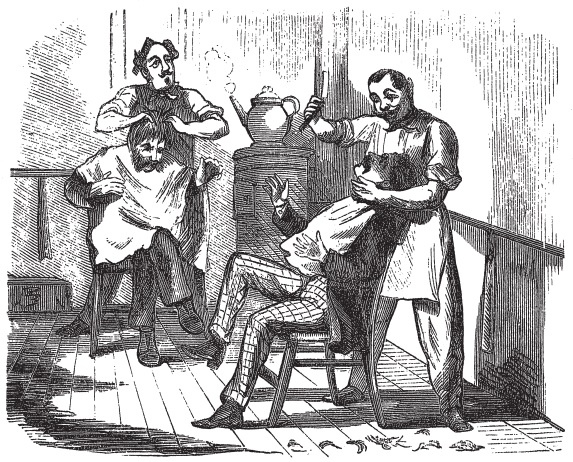 Then we hunted for a barber-shop. From earliest infancy it had been a cherished ambition of mine to be shaved some day in a palatial barber-shop in Paris. I wished to recline at full length in a cushioned invalid chair, with pictures about me and sumptuous furniture; with frescoed walls and gilded arches above me and vistas of Corinthian columns stretching far before me; with perfumes of Araby to intoxicate my senses and the slumbrous drone of distant noises to soothe me to sleep. At the end of an hour I would wake up regretfully and find my face as smooth and as soft as an infant’s. Departing, I would lift my hands above that barber’s head and say, “Heaven bless you, my son!”

So we searched high and low, for a matter of two hours, but never a barber-shop could we see. We saw only wig-making establishments, with shocks of dead and repulsive hair bound upon the heads of painted waxen brigands who stared out from glass boxes upon the passer-by with their stony eyes and scared him with the ghostly white of their countenances. We shunned these signs for a time, but finally we concluded that the wig-makers must of necessity be the barbers as well, since we could find no single legitimate representative of the fraternity. We entered and asked, and found that it was even so.

There was a wild consultation, and afterwards a hurrying to and fro and a feverish gathering up of razors from obscure places and a ransacking for soap. Next they took us into a little mean, shabby back room; they got two ordinary sitting-room chairs and placed us in them with our coats on. My old, old dream of bliss vanished into thin air!

I sat bolt upright, silent, sad, and solemn. One of the wigmaking villains lathered my face for ten terrible minutes and finished by plastering a mass of suds into my mouth. I expelled the nasty stuff with a strong English expletive and said, “Foreigner, beware!” Then this outlaw strapped his razor on his boot, hovered over me ominously for six fearful seconds, and then swooped down upon me like the genius of destruction. The first rake of his razor loosened the very hide from my face and lifted me out of the chair. I stormed and raved, and the other boys enjoyed it. Their beards are not strong and thick. Let us draw the curtain over this harrowing scene.

Suffice it that I submitted and went through with the cruel infliction of a shave by a French barber; tears of exquisite agony coursed down my cheeks now and then, but I survived. Then the incipient assassin held a basin of water under my chin and slopped its contents over my face, and into my bosom, and down the back of my neck, with a mean pretense of washing away the soap and blood. He dried my features with a towel and was going to comb my hair, but I asked to be excused. I said, with withering irony, that it was sufficient to be skinned—I declined to be scalped.

I went away from there with my handkerchief about my face, and never, never, never desired to dream of palatial Parisian barbershops anymore. The truth is, as I believe I have since found out, that they have no barber shops worthy of the name in Paris—and no barbers, either, for that matter. The impostor who does duty as a barber brings his pans and napkins and implements of torture to your residence and deliberately skins you in your private apartments. Ah, I have suffered, suffered, suffered, here in Paris, but never mind—the time is coming when I shall have a dark and bloody revenge. Someday a Parisian barber will come to my room to skin me, and from that day forth that barber will never be heard of more. 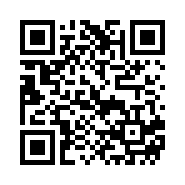